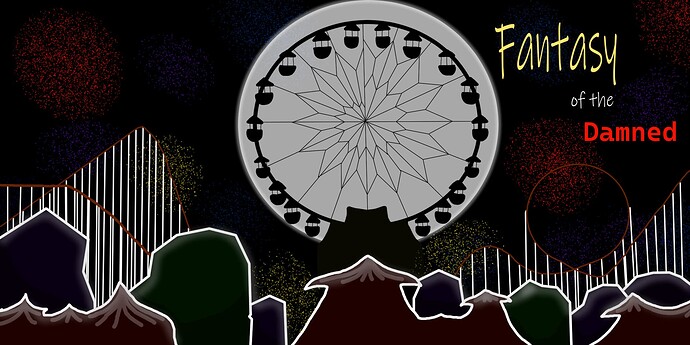 Fantasia… it’s something like an amusement park, if someone gave a psychopath a massive budget and magic and gave them free reign over the area. Nobody knows how people get in, but once they do, they are forced to play along to their host’s whims in order to have a chance at surviving and escaping. An eternal dusk sits over the park, and coasters rise like extravagant execution devices, simply waiting for an unsuspecting passerby to take their risk.

It’s called Fantasia for a reason, though. If you manage to escape, you’ll gain wealth and powers that you could only imagine in your wildest fantasies.

The Fantasy of the Damned is an interactable roleplay. Players will join by making a character, the template for which will be provided below. If a player wishes, they can privately enter for the chance to be the Saboteur, who will gain certain advantages in return for increased responsibility. There will only be one Saboteur. Players who are not chosen to be a Saboteur will be given the full choice of any other alignment, those other alignments being Good, Neutral, or Evil. There will be strict caps for the amount of the latter two alignments, and a majority of the game will be composed of Good-aligned players. Different alignments have different win-cons, will be privy to different information from the host, and will have different weight capacities for abilities. Alignments can change, but there will be penalties associated with doing so, so I’d suggest signing up for the alignment you most wish to play as!

Players will get nearly full control over their character’s abilities. Rather than a set amount and/or type of abilities, players will instead have an alignment-dependent ability weight capacity. Smaller, less useful/powerful/versatile abilities will have lower weight values. This weight capacity mechanic allows for more personal and varied gameplay (or, at least, I hope it will). If you want a character that has a bunch of smaller abilities that are useful in specific situations, go for it! If you’d rather your character be a sort of glass cannon, you can invest a large amount of points into a small amount of abilities. As a sort of reward for reading the OP thus far, here’s a bit of a gift! Themed characters, such as the one in the example, will get a bit more leeway with ability weights.

However, no matter what you start off with, you will get the option to change your abilities down the line. Level-ups will be granted after certain points in the roleplay, as well as large events or interpersonal bonds. With these level-ups come increased stats, as well as the chance to create a new ability! Your ability capacity won’t change with a level-up, but you can change out an ability you aren’t liking for something you might think will be more valuable.

Ability restrictions will be mostly coming in the form of strength limiters and enjoyment limiters. For example, the Saboteur won’t be able to have an ability that’s like “For 20 Mana, kill a player.” because that would be dumb!

While Evil-Aligned players do have a lower Ability Weight Capacity than Good players, there is a hidden mechanic in play that will balance this out somewhat.

Abilities can be pitched while the character is being created, and will only be locked in once the game starts. If you want to know how much weight an ability would hold, feel free to ask the host! If you need ideas or want advice, do the same. I want to increase the amount of enjoyment in this game as much as possible!

Players will also start with a single item, within reason. There is an inventory cap of six reasonable items (essentially, nothing too large.)

As mentioned before, the Saboteur will be a single player who has more sway over the game and more control over their character. If you’ve ever played Dungeons & Dragons, think of the Saboteur as the BBEG. They will be focused around stopping other players from carrying out the game’s tasks, although their exact win-con will remain hidden for now.

The Saboteur also has the additional responsibility of creating areas for the game. These areas, if the Saboteur so desires, will be more malicious and/or harmful than the average area created by the host. Other players will, by default, not be aware of which room is the one made by the Saboteur.

The average player will not need to kill the Saboteur to win, although they might be forced to defend themselves.

The host will set up a role PM for you when you join the game, so don’t worry about that. Additionally, the main thread will be accessible for all players at any time. DMs with other players are not only allowed, but encouraged! Just make sure that the host is included in them, alright?

If you have questions, I strongly advise asking the host rather than just sitting in silence and confusion! I want this game to be as fun as possible for all players.

If you die, welp, that fucking sucks, man. But, good news! You’re not out of the game just yet! You have three choices: You can pass on, integrate, or haunt.

The Last Stand mechanic is a mechanic that activates when a player hits 1 HP. The first blow that would kill them while Last Stand is active for them will instead leave them at 1 HP. Any bleeding or poisons are temporarily halted for 3 turns. The next turn, they will have priority in Initiative rolls. If two players both activate Last Stand at the same time, they will be in their own Initiative category.

Last Stand replenishes every time a player is healed to full health.

Characters will have a few different stats.

Characters* will start out with 60 Stat Points at the start, which can be invested however the player wants. With each level up, 10 Stat Points will be gained. Stats may be gained through in-game character actions, as well.

Characters must give a name, a gender, a physical appearance, and a backstory is highly preferable and will give you an advantage in the game. An example card may look like the one below.

I can not emphasize this enough! If you have questions, ask the host!

I will make a rolecard for players when they join the game, and in there is where ability proposals and Saboteur applications will be made. I ask you to please not make one yourself, even if I take a few minutes to create it.

perfection, time for an enjoyable game

will i go the harpy route again?
probably not but ny choice will be unhinged and glorious

considering
will make final choice though when not just woke up

i don’t blame you

i guess im debating whether or not i try to work past it
its probably manageable
but its hard to roleplay character without a specific phobia that you have lol
because its hard to post not-panicky when you are panicky
unless youre good at wolfing, which is what we train on this site

they can be very eerie

aelin asked for a backstory but then posts an essay

: Dwayne Douglas Johnson, also known by his ring name The Rock, is an American actor, businessman, and former professional wrestler. Widely regarded as one of the greatest professional wrestlers of all time, he wrestled for WWE for eight years prior to pursuing an acting career. His films have grossed over $3.5 billion in North America and over $10.5 billion worldwide, making him one of the world’s highest-grossing and highest-paid actors.

Johnson played college football at the University of Miami and won a national championship in 1991. He aspired to a professional career in football, but went undrafted in the 1995 NFL Draft. He signed with the Calgary Stampeders of the Canadian Football League (CFL), but was cut from the team in his first season. Part of the Anoa’i family, Johnson’s father Rocky and maternal grandfather Peter Maivia were professional wrestlers, and he secured a contract with the World Wrestling Federation (WWF, now WWE) in 1996. He rose to prominence after developing the gimmick of a charismatic trash-talker and helped usher in the Attitude Era, an industry boom period in the late 1990s and early 2000s. Johnson left WWE in 2004 and returned in 2011 as a part-time performer until 2013, making sporadic appearances until retiring in 2019. A 10-time world champion, including the promotion’s first of African-American descent, he is also a two-time Intercontinental Champion, a five-time Tag Team Champion, the 2000 Royal Rumble winner, and WWE’s sixth Triple Crown champion. Johnson headlined the most-bought professional wrestling pay-per-view (WrestleMania XXVIII) and was featured among the most watched episodes of WWE’s flagship television series (Raw and SmackDown).

Johnson’s first leading role was as the titular character in the sword and sorcery film The Scorpion King (2002). He has since starred in the comedies The Game Plan (2007), Tooth Fairy (2010), and Central Intelligence (2016); the action-adventure films Journey 2: The Mysterious Island (2012), G.I. Joe: Retaliation (2013), Hercules (2014), and Skyscraper (2018); the science-fiction films San Andreas (2015) and Rampage (2018), and the animated film Moana (2016). His role as Luke Hobbs in the Fast & Furious films, beginning with Fast Five (2011), has helped it become one of the highest-grossing film franchises. Johnson also stars in the Jumanji films, appearing in Jumanji: Welcome to the Jungle (2017) and Jumanji: The Next Level (2019), and is set to portray Black Adam in its superhero film adaptation.

Johnson produced and starred in the HBO comedy-drama series Ballers (2015–2019) and stars and produces the autobiographical sitcom Young Rock (2021). In 2000, Johnson released the autobiography The Rock Says, which was a New York Times bestseller. In 2012, he co-founded the entertainment production company Seven Bucks Productions and is the co-owner of American football league, the XFL. In 2016 and 2019, Johnson was named by Time one of the world’s most influential people.

Oh
I copy pasted that from wikipedia

do our back stories have to be that long