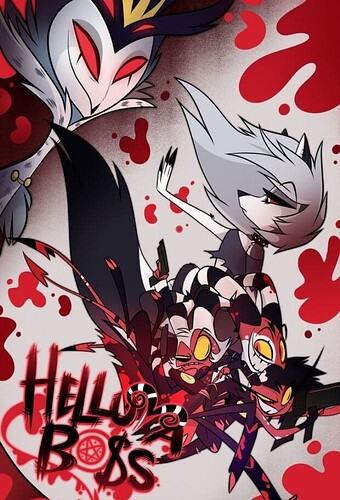 Hosted by @Arctic and @YouButWorse on @Artist

To determine the town power roles, roll a die six times and mark down the numbers. Each roll corresponds to a grouping below.

Mark down the number of each grouping and add the corresponding roles from the table below.

Add as many Vanilla Town roles as necessary to bring the total number of Town roles to 10.

Count the number of town power roles from above, then take that number minus one. Roll a die that many times and mark down the numbers. Add the corresponding roles from the table below. 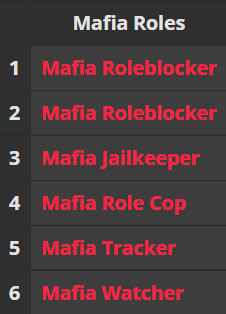 Add as many Mafia Goon roles as necessary to bring the total number of Mafia roles to 3.

The game is flavored around characters from the adult animated web series Helluva Boss created by Vivienne “VivziePop” Medrano. It revolves around the misadventures of the employees of I.M.P, an assassination company in Hell. Flavor is randomized independently from roles and is therefore not alignment indicative, and can be claimed freely.

I’ll think about joining once I’m home. No shot this fills in thirty minutes.
(…Maybe.)

I’ll think about joining once I’m home. No shot this fills in thirty minutes.
(…Maybe.)

I doubt it, seeing as it isn’t Danganronpa misc.

i also need a co-host so i’m taking applications

…i’d say preferably someone who can handle stuff when i’m asleep but i don’t really have A Sleep Schedule right now so i think anyone is fine. probably

that covers most bases i think, i’ll put you down then?

in as full vigilante

Not Low Priority, since this setup is very fun but I don’t want to instantly join.

/In.
Would you accept a hydra?

Would you accept a hydra?

A monkey is jumping on a pfp, he jammed and hit his head