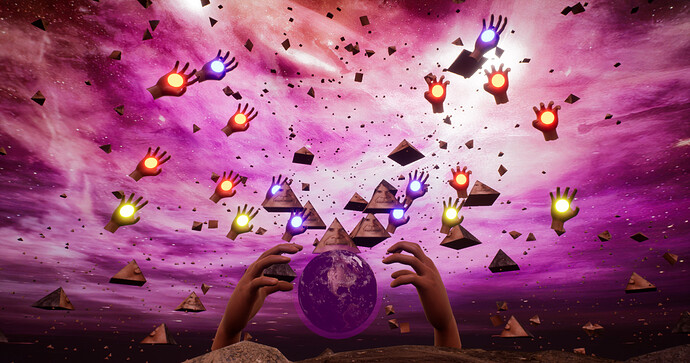 I henceforth refuse to acknowledge any association between the individual known as “Magnus” and myself. Furthermore, I cannot confirm exclusive rights to this alternative thread. I can confirm that I have the right to play the game before the game has begun, and that makes me more special than the rest of you. I can also say pregame actions may or may not exist.

There isn’t a lot to say before the game begins, so let’s just clear the air.

Alts will not be allowed in this game, and they are disallowed as a game mechanic.

For the sake of clearing up this “misconception”, this rule hasn’t been violated… technically. Any accounts not expressly belonging to a player are “NPCs”.

All post signup joins are NPCs. They may do absolutely nothing…but you can never know for sure. It is possible that they are Detroit: Becoming Human.

I’ll just address the elephant in the room really quickly.

Each of you must decide whether @Gorta is a cultist or mafioso. Do so in your rolecards before Day 1 begins or the answer will be randomized.

My first assumption upon seeing this announcement was “it’s multiball and this game is doomed”. In case anyone is unaware, cults are typically a third-party faction seeking to recruit members into itself, thus changing their alignment. Given how this game was written by an AI, though, we can’t assume normal role conventions apply.

. Voting Gorta to be Mafia will result in their partners distancing and Gorta doing nothing, voting Cultist might result in the same outcome if it’s multiball but might bear a more interesting outcome. Or you could ignore me, I’m still just a normal person even if I can talk this early.

@God has entered the game. He is immune to any abilities and cannot be voted.

I’m hoping this is a joke.

I’ll see if I have anything else to say before SOD. First day’s at a really awkward time where it’s the weekend, but I still have an exam mere hours after EOD, so my attention needs to be split between paying attention to the game and revising, so… y’know what, it doesn’t matter. GLHF.

Voting Gorta to be Mafia will result in their partners distancing and Gorta doing nothing, voting Cultist might result in the same outcome if it’s multiball but might bear a more interesting outcome

That’s a logical leap, now that I’m thinking about it.
Hypothetically, if the game is multiball, Gorta really received the short straw, and either Mafia or the Cult would be left distancing or desperately trying to protect their slot, or scrutinising their slot to find anyone trying the first trick. Either way, this doesn’t sound very fun for one side.

Around the same time I signed up, with no expectation as to how my rolecard would look, I started considering a few potential fakeclaims and quickly settled on this guy:

Captain Toad first appeared back in Super Mario Galaxy on the Wii, in the year 2007. Galaxy wasn’t my first game, nor the Wii my first console, but I have the strong childhood memories associated with them both. I actually have Galaxy on Switch… I wouldn’t go so far as to claim Galaxy as my favourite game, but it certainly was my childhood favourite game. Captain Toad reappeared in a few later Mario entries — namely 3D World, Odyssey and Treasure Tracker — which I didn’t enjoy as much as Galaxy, but weren’t so obscure that nobody would recognise Captain Toad’s name. I’m rambling, but this entire post is just a tangent, anyway.

Why would I bother imagining a fakeclaim knowing neither my alignment nor an example card? To tell you the truth, it just makes the game more interesting. You can push false narratives and see how players react, see who accepts your claim at face value or who digs a little deeper. I’ll be unlikely to repeat that Starcraft experience again, with a legitimate fakeclaim believed by most of the players; now there will always be that doubt, in the back of player’s minds.

AND THEN I GOT OUTED IMMEDIATELY SO NEVERMIND.

@Omori may no longer speak in this thread.

@Omori may speak in this thread

I didn’t mean to miss EOD, I fell asleep. Which is perfectly in-character.

Catchup level-0 surface wallpost. I cannot be silenced.
I can take my time.

Votecount at time of sleep:

@eevee where did you go? You should read up, there are only <700 posts.

Eevee never responds to this, or gives any indication as to whether they did or did not read the thread.

Unless zorvo knew something about god that we don’t, he’s not mafia
the Level 2 scumplay of asking for the name of a mafia is not something that i think comes to his head unless hes actively planning to kamikaze someone by pretending theyre mafia

Zorvo’s wish was something intentionally I steered clear of, since I wasn’t sure what to think of it in isolation. Evil wishing to learn an evil, while something an evil wouldn’t need to do, does appear good, so I kinda filed it away in my mind. Still, it doesn’t jive with my approximation of a w!Zorvo trying to fly under the radar. Yet the rest of his behaviour screamed red flags to me, and if he wanted to learn an evil… why not wish to learn every evil? There were too many unknown variables, so I threw it out the window.
We have more information regarding God’s wish, which we can discuss further tomorrow.

oh im done reading
in conclusion VOTE: WindwardAway
i still dont like wazza but i think i judged her a bit harshly earlier

Knowing in hindsight that Wind’s an IC, this does shine rather harshly on Jaiden; at least from my perspective, although nobody around at the time really raised an eyebrow at this vote. In Jaiden’s defence, Wind did selfvote and all… and there weren’t a lot of players around to make content.
In conjunction with the Zorvo mention, Jaiden could be softly defending Zorvo and agenda!pushing Wind. I’ll look at the rest of her ISO later to see if that makes sense.

If at the end of the day the votes are tied, something ridiculously stupid will happen.

I kind of want to see that happen btw.

Eevee’s starting content isn’t great either. Appears in the thread late in the day, strongly pushes for a no-exe (which Town goes along with?), and cranks sixteen posts. Something is very wrong here.

Which bot you want to kill

Interesting focus on Wazza, I’m not sure what this means. Or if it means anything at all.

But yeah, I think you misunderstood what I said.

I don’t want to kill bots, I’m saying that if it randomises, it can hit one of the bots. Most likely.

17 villagers.
14 bots? It’s close to 50/50 if it rands, it’s not most likely at all. Making this post at all suggests Eevee’s been keeping track of the thread though, if only skimming it.

A true testament to this Town’s energy. Everyone just seems exhausted, more than anything.

Initial reasoning was to see what ridiculous something would happen, and yet Eevee’s logic changes after this point.

Chaos is a ladder

Jaiden is voted by Blizer.

No need to rush stuff.

This is what I mean by Eevee’s reasoning for the no-exe shifting.

you can do this to ANYONE but me

If at the end of the day the votes are tied, something ridiculously stupid will happen.

Why is everyone up for this? I swear tying the votes intentionally is antitown behaviour.

Just join me on no lynch.

There is no strong leadership. No strong wagons. People need time. Then just give them time.

Magnus will remember that.

I am bothered. I passed out and Town spirals out of control immediately.

Probably a good look for Zone.

I’ll draw back to this post, but it looks a lot like Jaiden was threatening to shoot Blizer tonight. How ominous.

Blizer and Jaiden are just as bad as each other.

@hosts is noexec on

After Zone votes Jaiden, there should be three votes on her slot (which makes her the leading wagon).

Jaiden wanted chaos. Like for example random person dying from God’s wish.
It’s not a chaos beneficial for scum, rather risky true chaos.

Windward was bd, but also didn’t have time to play and I know it’s true. They were organizing a birthday party and stuff, I’m fine with waiting.

In general there is no content and no strong traction. I’m considering all wagons a ~meh level rn.

This suggests Eevee has read and found nothing major.
…My conclusion, based on little evidence, is that Eevee’s pushing agenda.

I have to agree with this sentiment.

I’m actually beneficial to town but there is a role that can either help town or change the entire game for a player.
Lol.

I’d like this to be explained tomorrow, please and thank you in advance.

God states that WindwardAway is Town.

Here is the innocent child.

A shot rings out.

And given the earlier mention of Jaiden “going to shoop da woop” on Blizer, I’m wondering if this correlates. Nobody flipped. This could be Joker-related. A random player could’ve been shot from Jaiden’s wish, I guess?
I have a tinfoil theory. I’ll reread the thread later, try and ISO specific players, but I don’t think yesterday was entirely townled.

…Imagine losing a game on the internet.