hosted by @Arete and @Mistyx 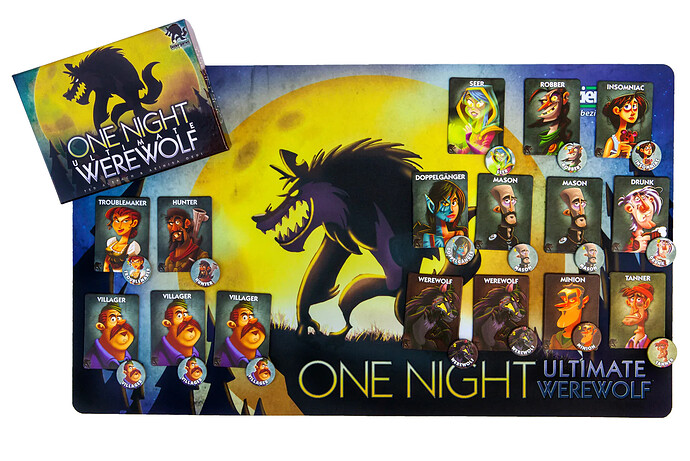 Phases and other info

Roles in this game

This game may use any of the roles in the game. To create the role list, I will automatically add two werewolf cards to the game. Then, I will shuffle together all the other roles, and add rolecards until there are n+3, where n is the number of players. The roles will be randomly assigned to players, with the three leftover roles becoming the center.

This means that you don’t know what roles are present! This provides a counterbalance to the townsided nature of limited claimspace.

If the role list I generate is truly egregiously unbalanced, I might rerand. This will only be done as an extreme measure.

The following roles may be present:

Villager: Basically a vanilla townie. No abilities, does not wake at night. Up to 3 Villager rolecards may be present in the game.

Hunter: If the Hunter is killed in the vote, the player he is voting for also dies.

Seer: The Seer may either look at one other player’s rolecard, or at two center rolecards.

Robber: The Robber steals another player’s rolecard and gives that player their rolecard. They learn which rolecard they stole.

Troublemaker: The Troublemaker swaps two players’ rolecards. They may not swap themself.

Drunk: The Drunk exchanges their rolecard for a rolecard in the center. They do not see their new rolecard.

Insomniac: At the end of the night, the Insomniac learns what rolecard they currently have.

Werewolf: All Werewolves wake to learn each other’s identity. If there is only one werewolf, they may look at a center card.

Minion: The Minion learns the identity of the werewolves. The werewolves do not know the minion’s identity, or even the fact that there is a minion.

Tanner: The Tanner has no abilities. They win if they die in the vote at the end of the day.

Doppelganger: The Doppelganger wakes at the beginning of the night, views another player’s rolecard, and takes on that role and win condition.

In the past, other adapted board games have been hosted as miscs, and I don’t think this is more FMy than those

So you’re going by “Arete” now nerd? Haha whats up douche bag, it’s Tanner from Highschool. Remember me? Me and the guys used to give you a hard time in school. Sorry you were just an easy target lol. I can see not much has changed. Remember Sarah the girl you had a crush on? Yeah we’re married now. I make over 200k a year and drive a mustang GT. I guess some things never change huh loser? Nice catching up lol. Pathetic…

/in
Is it a custom here to get pinged on Discord before your game starts?

Is it a custom here to get pinged on Discord before your game starts?

It doesn’t happen by default but I can ping you

My signup blacklisting is almost over so I’ll be able to in once it ends.

how long is this likely to last?

oh wait is this a one round thing? that’s totally okay
I actually own onuw and the expansions which have been used like, once because nobody I know irl likes social deduction besides among us