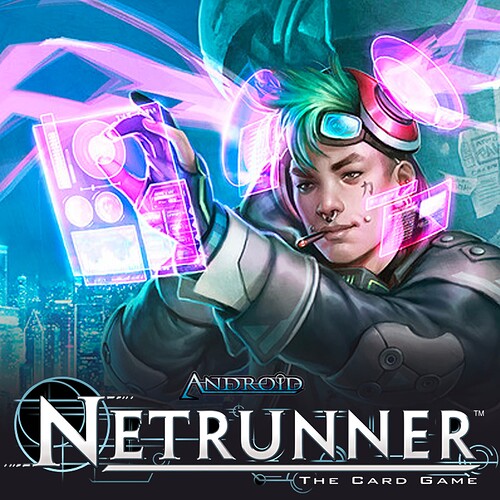 Netrunner was a Living Card Game designed and developed by Fantasy Flight Games. It was set in a dystopian, cyberpunk future where monolithic megacorps own and control the vast majority of human interests.

While corporation players try to score points by advancing their agendas, they have to guard their intellectual properties from the elite and subversive hackers known as netrunners. Netrunners attempt to win the game by stealing the corp’s agendas, by any means possible!

The game was sadly discontinued in 2018 when FFG’s license with Wizards of the Coast expired. I was pretty salty about this at the time, but a fan-led continuation of the game called NISEI has continued to maintain stewardship of the game and has kept the game alive for the past five years. Hopefully you can enjoy this mafia game loosely flavored around the LCG.

This game will feature mentors, which are an ideal way for newer/less experienced players to get some personal help throughout the game!

The way this will work is that a mentor may lend their help by posting /mentor in the sign-up thread, and players who are signed up may optionally request a mentor to help them with their game. (Mentors, as well as knowledge of who is mentoring who, is also public). Mentors and mentees may discuss reads privately; however, mentors should not impose their reads on their mentees. Mentors should not be discussed or referred to in the main game thread. Please let me know if you have any questions about this.

All private conversations should be copied to me (I recommend making a PM chain and inviting me and my cohost).

This game will feature a postcap of 100 posts per day. Postcap will be lifted 2 hours prior to EoD.

I did not read the OP

looks cool, i like the mentor system as well though I do think the “can discuss reads but may not impose their own reads” may be kinda hard to enforce and could be worded better to be more clear. May in later if im feelin cute idk

really happy to see someone hosting a mentor game on fol

I’ll try to put up some examples later.

Ideally the goal would be that the mentor can talk about their process or be able to answer general scum hunting questions for example but not share any of their own reads.

I am also considering implementing a postcap. If that is something people would be interested in, let me know.

mentors being public feels kinda wrong to me but prob too late to talk about that, and i can see the argument that its kinda needed here

would also strongly be for a postcap in a mentor game, given certain players definitely need some advice on their postcounts

seconding postcap, would probably do 100 for a mentor/mentee game?

/in as mentor for Caspore

I could maybe try mentoring.

is your pfp… nothing?

Don’t ask questions you can’t handle the answers to

I played Among Us and got Pocketed by a dude.

I’m hoping I can get him to play this game and mentor him!

this looks like a super fun mechanic, excited to try this out!