created and hosted by @katze, cohosted by @InsanityUwU on the host account @Host_Account_2
reviewed by Osie

All players must post a minimum of 5 substantive and game-related posts per 48h Day phase. If the day phase ends early, this may be waived.

The hosts may or may not utilize WOTM to prohibit players from joining.

THIS GAME HAS A POST CAP. Players can only make up to 50 posts per in-game day. This is lifted 1 hour before EoD. The first time this is exceeded by a player, a warning will be sent to them. The second time, they will be modkilled.

EXCESSIVE AtE IS NOT ALLOWED. Appealing to emotion can result in a toxic environment that ruins enjoyment. I want this game to be relaxed but still serious. As a result, I will be monitoring the thread for heavy AtE. If you aren’t sure if what you’re posting breaks this rule, feel free to run it by me. If you find yourself unable to play the game without it affecting you emotionally, please let me know so we can help you. Feel free to message me at any time if you need to vent, or just want to talk.

Roles and the first paragraph of flavor is NAI, the second paragraph is AI and quoting it will be punished. (For reference, in the example rolecards below, all bolded and italicized text is legal to claim)

I want to play, but waiting on the playerlist first

maybe i’ll be willing to inform after a phase or two, but not from the start

if that effects your decision lmk

also am looking for a cohost

i will intsead cohost and do nothing
(depending on eod)

haven’t decided on a start date yet but i optimally want to avoid massive interlap with the sorcerer game so i’ll prooobably at least try to have SoD/EoD be a bit later than that game and hopefully start a day or two later?

mmmkay
my optimal eod time is not optimal for players, so
(i can be online anywhere from 5 est to 11 est, so lol) 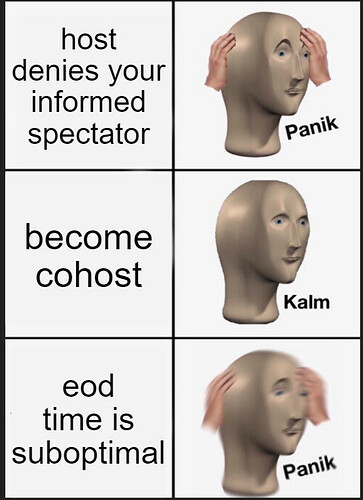 after discussion with eli im still looking for a cohost

and then i sleep until you get home from school

I am writing to you today to ask to join this game. While I am a complete newbie here on special chair of deception, I have prepared a short list of reasons why I should be allowed to play in this game.

In conclusion, if you vote me to be allowed in the game, I promise pizza and ice cream for everyone in school.

I don’t know how the old site was, but this new site is pretty dope. Checking through all the stuff you’ve got set up here :)

I am reluctantly accepting your application to join this game. However: