Catgirls are unequivocally one of the most destructive trends in human history, and in recent years they’ve only gotten worse. The advent of the internet provided humanity with the capability to communicate with nearly anyone else on Earth in real time, opening the floodgates to levels of collaboration and scientific and cultural progress previously unimaginable. This network enables each and every human on the planet to take the time their ancestors spent mulling about waiting for the crops to grow and use it to learn new skills and put them to use to advance the entire human race… in theory. In reality, most people use the internet to actively avoid doing anything productive, meaningful, or worthwhile, with this millennia-old fad leading the charge.

By this point, everybody is trying to cash in on the idea of catgirls, with everything from Halloween costumes to video game cosmetics being dominated by cat ears and tails, mega-corporations making billions each year using fictional characters to separate fools from their wallets. We’ve been so caught up in the craze that we’ve neglected to pay attention to the hefty toll they have wrought on actual human lives. Reduced attention spans, social anxiety, depression, even the global rise in fascism - study after study has shown that catgirls are to blame, and yet the multimedia machine churns on, oblivious to the irreparable harm done to those it is purporting to please.

This is where you come in. Your mission, should you choose to accept it, is to become humanity’s last line of defense against the overwhelming hordes of knockoff catgirls. For only a true catgirl can show humans the error of their ways.

1: Due to the closed nature of invites and spectators, do not discuss this game anywhere outside of host-approved channels, regardless of whether you are a player, spectator, or none of the above. This includes discussing whether or not you were invited, even if you did not accept, until after the game has concluded. Failure to follow this rule will result in long-term blacklisting from any games by all involved hosts.

2: Follow the Global Rules and the Forum Game Rules. Seriously, read them again, we’ll be enforcing all of them.

3: Don’t be inactive. If you do not post meaningfully within 24 hours or at least twenty times in any given phase, you will be prodded. Receiving two prods or failing to respond to a prod within 12 hours will result in your removal from the game. Attempts to “prod dodge” by barely meeting this limit are discouraged. If something comes up that affects your involvement with the game, discuss it with the hosts before it becomes a problem.

4: Direct all questions to the hosts through your role card, not publicly in the thread, and do not ping the host account except for when you vote, as described below. We will not answer questions posed publicly.

• This game will be a closed rolemadness setup with minimal information and some elements that may be considered lightly bastard.

• Days will be 48 hours long, and nights will be 24 hours long. Night actions will be locked 1 hour before daystart in order to give the hosts time to process them by SoD.

• Players may not make more than 250 posts in any given day phase. This restriction will be lifted one hour before EoD. Players are responsible for policing their own posting to avoid going over the cap. New cap numbers for each player will be posted each night phase.

• The informed minority will have access to an anti-claim ability. In particular, claiming or hinting at your flavor will be EXCEPTIONALLY dangerous.

• Standard “slept peacefully” feedback will be given to any player who does not specifically get other feedback, including both successful non-investigative actions and those whose actions have been blocked.

• Unless specified otherwise, no roles may self-target, including protective roles.

• The hosts will give current vote counts whenever they are available to do so. Votes will automatically be locked in at LyLo and may not be changed once placed. This will be announced.

• In the case of a tie, the informed minority will determine which of the tied players is eliminated. 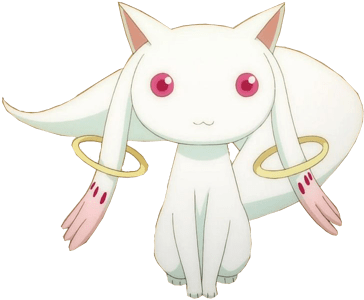 Kyubey730×600 229 KB
Although whether or not your species even has genders is unconfirmed, you’re still pretty much a cat, and you mostly hang around girls, so… close enough?

Example Card (Passive) - Because you are an example role card, you will not actually spawn in the game.

Contract (Day) - Get your target to sign a contract, adding them as a participant in this game. (Infinite uses)

Host (Night) - Compulsively carry out all the night actions your players use tonight. (Infinite uses)

You must ensure the game is not Canned.

It is currently pregame.

The game has been randed and rolecards will go out within the next 24-30 hours, based on host availability. Please continue avoiding discussing the game outside of this thread or other host-designated places. If you are not a player and would like to talk about the game, please feel free to send a PM to @orangeandblack5 or a DM to orangeandblack5#4506 on Discord to ask for access to the spec chat, where you may discuss the game freely.

For any players new to or relatively unfamiliar with Discourse, please, consider giving the following a read:

This guide explains the basics of browsing and posting on Fortress of Lies, a forum powered by Discourse.

This guide explains some specific ways to use some of the features of Discourse in the context of a Forum Mafia game.

Similarly, I would like to reiterate that all questions to the host should be made in your role PM, not in the thread - this extends to other things you would like to draw the hosts’ attention to.

We will be utilizing a customized version of a vote count spreadsheet first developed by Kaitlynmm569 for use on Chief Delphi. I have made some tweaks and upgrades to it that allow it to do many more things, such as automatically sort itself by the number of players that are voting for a given player, bold the player(s) that are the closest to being eliminated, and automatically generate links to the post where a vote was cast based on the post number.

In the case of a tie in terms of the number of individual players voting for a given target, the sheet will sort the names alphabetically when determining the order they should be displayed. Please understand that this may sometimes lead to wonky or unintuitive-looking vote counts. This is something I hope to improve before this spreadsheet is publicly released for usage by all hosts, but simply do not have time to address before my game begins, as my first priority has been getting the game up and running. However, the bolded player(s) should in theory always be those closest to going over.

If you ever see any errors outside of these sorting restrictions, such as the hosts missing a vote, a vote linking to an incorrect post, or any other inconsistency, please just let us know in your role PM and we will address the issue as quickly as we can. Thank you for your patience as we give this new method of counting votes a try.

Objective: Point to and rid the earth of all false feline idols. Lethal force- authorized.

Parameters: Separate the false from the true. Do not harm innnocents upon grave consequences.

Tools: Anything at your disposal. You will be programmed with a small arsenal. Attack to kill. Show no mercy. Use prime LASER force only if absolutely necessary.

Interface: You will walk among them as a feline female using the avatar we have prepared for you. You have been programmed with multitudinous feline phrases. Use these quips to blend in. Do not let them find you.

Meow do you do fellow felines? Lovely weather we’re all having today it’s so purrfect!

Programmer’s Note: the LASER pointer system may occasionally malfunction and randomly post a cute cat gif. This is an inevitable bug and could not be repaired without corrupting the core memory of the system. This is completely normal.