Welcome to Mountainous Poison, hosted by @Arete and @Geyde on @ShinyVenusaur !

The hiking expedition leader counted the people in the group, making sure all sixteen of them were still there. The Society of Edible Wild Plants had held conferences before – in fact, he recognized some of the group members from the previous conference – but this was the first time they had actually decided to get together and put their studies into practice as a group.

“Are you sure this is a good idea?” asked his boyfriend. “If any of these people are less expert than they think they are, you could die.”

“I’m sure it’ll be fine,” he said. “It’s not like it’s hard to identify a raspberry, or anything. Random people shouldn’t be picking mushrooms off the forest floor, but these aren’t random people.”

“If you’re sure,” said his boyfriend. “See you tomorrow.” He walked back to their car.

“Just to check,” said the hiking leader to the group. “Does everyone have their camping supplies and maps, and enough water?”

Everyone in the group nodded. The leader started walking over to the trailhead, and the rest of the group followed him.

An hour before sunset, the group reached their campsite, halfway up the Fortress Mountain. The path to get there had been filled with branching forks and narrow twists, but with the help of the guide, and their maps, they had been able to arrive safely and without incident.

“I’ll set up the tents, while the rest of you forage,” said the hiking leader. He had been planning to forage himself, but they were behind schedule, and the tents needed to be up by sundown or it would be much more difficult to assemble them. The rest of the group scattered into the woods, looking for edible plants, the true point of their expedition.

Finally, as the last of them trickled into the campsite, they gathered around the campfire to divide up their spoils and sat down to eat dinner. The hiking director started to eat his food first, while the rest of them exchanged stories of their attempts to gather edible plants.

A few minutes into dinner, the hiking director started to cough. He winced, holding his stomach.

“Are you okay?” asked the hiker sitting next to him.

A few minutes later, the hiking director retched and vomited. The hiker next to him glanced at him warily. “Let me see that,” she said, grabbing his plant out of his hands.

“This flower isn’t edible,” she said. “It’s hemlock, which is really toxic. Actually, multiple of these look toxic…”

“Who was dumb enough to put hemlock in his dinner?” asked someone else.

“I don’t think anyone here would be that stupid,” she said. “We’re all experts. It must have been deliberate.”

“We should try to go back,” said yet another person. “I know it’s after dark, but if there are literal murderers here, I’ll take my chances.” They rummaged in their backpack for their map. As they pulled it out, their face turned from bitter determination to horror.

“Everyone, check your backpacks for your map,” they said. The rest of the group began to look for their maps, and one by one their faces began to match the expression of horror. Instead of the map they had been expecting to find, all of them had an identical piece of paper: 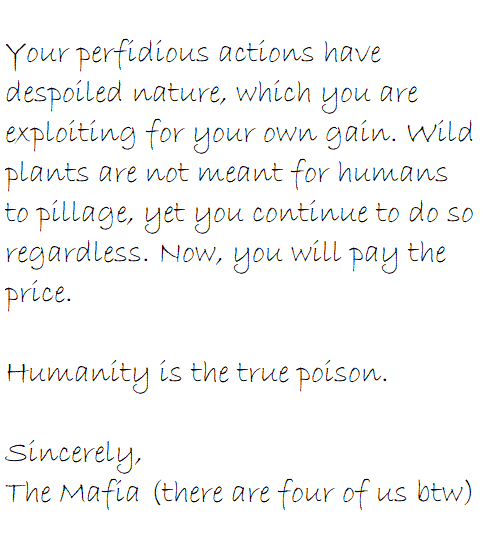 All of them looked at the hiking director, who was convulsing on the ground. If they wanted to have any chance of survival, they needed to find the murderers, quickly.

no you don’t understand
i am free

No idea what that is but ok

I thought you said you were free?

I wanna have it made clear I clicked this gif so many times trying to close the tab of the gif and load back into this one and now I’m angry because of it >:(

Oh ok so my guess was vaguely correct lol