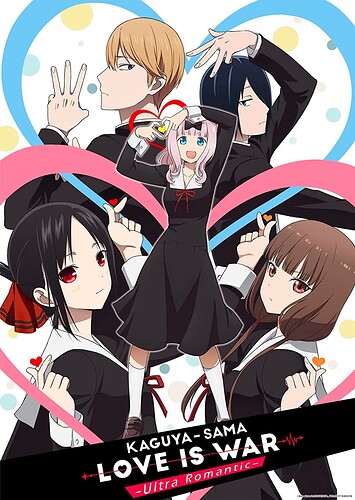 Welcome to Kaguya-sama: Love is War Mafia, a closed normal setup for 17 players.

It was just a normal day at the student council at Shuchi’in Academy. Miyuki Shirogane, the student council president, ended up being the first to arrive after classes ended. He started to take the time to brew some tea, before tackling the endless amounts of paperwork he had neatly organized on his desk.

Before long, the other student council members began to trickle in. First it was Ishigami, and the two boys started to chitchat a little bit about their shared interest in manga. Iino soon arrived, and chastised the two of them for not setting a better example to the school’s underclassmen. Before too long, Kaguya herself stepped in with her graceful smile and helped herself to the president’s tea. It was a very relaxed and productive time in the student council room.

The doors to the student council room flew open, and out came Fujiwara, seemingly hyped up for no particular reason at all. It looks like she just came from the Tabletop Gaming Club, as she had a very visible box of cards with her.

“Let’s all play a social deduction game! Mafia! You have to find out who among ourselves is the evil killing mafia before we all die. We shall play this at once!”

“Mafia?” Ishigami asked. “Is that like Among Us? What will we be doing?”

“It’s simple!” Chika declared as she passed the cards face down to each of the student council members. "The majority of us will be the town, and a small number of us will be the evil mafia! All you have to do is look at your card and it will say if you are a villager or a mafioso. Villagers talk during the daytime and vote on a person to eliminate during the day, and the mafia converse with each other and figure out a person to kill at night!

I wonder who you will be, Ishigami?" Chika exclaims as she slides him his card. “Makihara introduced us to this game an hour ago and we ended up loving it! So we passed around cards to the entire student body so we can play one big game of mafia together!”

Role PMs will be sent out within the next hour or so.

Role PMs have been sent out.

As soon as Chika hands out the last card, the lights in the student council room immediately begin flickering, and then pretty soon the entire room was pitch-black. “W-w-where’s the door?!?!” Iino yells. Ishigami, who was incidentally closest to the two grand wooden doors, pushes them open. “It’s no use,” he sighs. “The entire’s school’s lighting is out.”

“I’m sure there’s nothing to be worried about!” Chika exclaims. Within a couple of minutes, the lights to the school, and then the student council room, slowly began to flicker on. As everyone were checking their surroundings, Kaguya points to someone that wasn’t there before: A petite girl, covered in blood, near the corner of the room. “W-w-w-who is that?”

Everyone dashes over to the girl, but something was… off. She didn’t appear to have any external injuries, and upon closer examination, it appeared that the girl was trying to play dead and that the blood was fake. As soon as everyone realized this, the girl opened her eyes.

“It was so hard to pull this off on a short time frame,” Makihara, one of Chika’s friends and president of the Tabletop Gaming Club, explains. “Chika, you should have came and handed out the cards earlier! Then we could have timed the blackout and my ‘death’ better.”

“Anyways, let’s just pretend that I was killed, alright? This is a challenge to the Shuchi’in student council and the rest of the school: Try and find out who ‘murdered’ me.”

Mistyx has been killed in the pregame.

Who wants to be my mason buddy for the day? I will treat you as town and you will sheep my votes to make me a double voter so I can solve the game better. see happy tree friends mafia for my wolf pelt with this method. Side note if I have kp I might shoot you night 3 in paranoia in a shot that can be highly critiqued but also game solving.

you are required to be around if and when I change my vote though. I will notify you. ty

ok then i refuse the offer sorry